Using Ollas for Indoor Plants: Everything You Need to Know 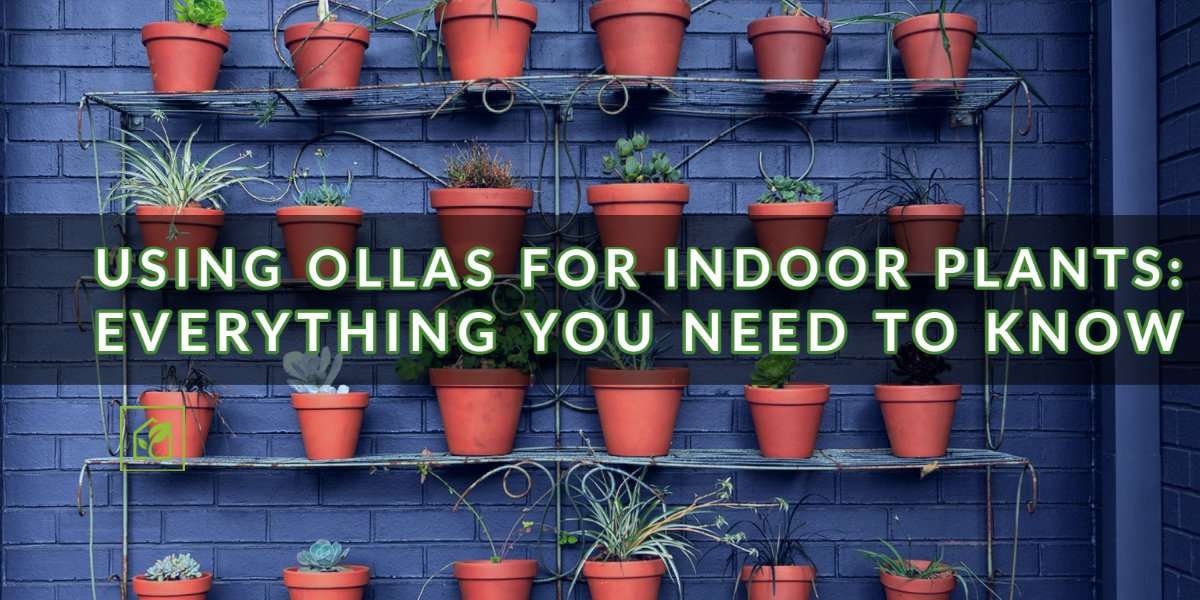 Different plants have different needs, from the soil needed to grow, sunlight required daily, to fertilizer requirements. One thing is common for all plants; they all need water. Plants need water to grow and stay healthy. As important as it is to water plants regularly, it is not uncommon for plant owners to forget from time to time, this is where Ollas come in.

Ollas for indoor plants are valuable tools to help keep plants watered. Ollas can be bought at any gardening store, but if you prefer the hands-on approach. They can be made at home and are relatively helpful to ensure your plants get enough water daily.

Required Materials to Make an Ollas

Terracotta pots, saucers, a small amount of cement, sand, and mounting putty is all you need to grab to make an Olla at home.

What Exactly is an Ollas

How To Make an Ollas

Find a suitable place to bury the Olla about rim deep; that way, just the pot’s rim is left visible from the soil. You could bury the Olla in the ground in your garden or another plant pot indoors. Add enough water to fill the Olla up, then cover it up with a lid which could be a saucer. Covering the Olla up will prevent water loss through evaporation.

How Does an Ollas Function?

Ollas have been used for centuries in several civilizations and work by slowly releasing or leaking water out into the soil around them after they have been buried into soil. This water leakage helps to supply water to the roots of plants in the surrounding soil. Ollas work through a process known as soil moisture tension. Soil has a varying moisture content, and when the soil around a buried olla gets dry, water is drawn out from the pot and directly into it. The moister the surrounding soil around the Olla, the less water leaves the Olla. Ollas prevent over and under watering and have been shown to save a tremendous amount of water than conventional watering methods.

Terracotta can be loosely translated to mean ‘cooked earth’ in Italian. Terracotta pots, a hard red-brown unglazed earthenware made of clay, are used to produce Ollas because they are porous. They allow water and air to pass through them easily; when used to make Ollas, they act as a deep reservoir for the plants around where they are buried. Terracotta pots are strong as well as durable and can be used for a very long time.

You can refill the water in the Ollas for indoor plants immediately it runs out or as needed based on preference. After some time, the roots of the plants in the soil where Ollas are buried start to grow around them, allowing them to take up more water from the ollas. This happens because the roots of plants are nutrient and water-seeking, meaning that roots grow longer and farther in the direction of the most water and nutrients.

Usually, just one Olla is sufficient for use in a small garden, but as many as possible can be used depending on the size of the garden and the water requirements of the plants in the garden. Gardens with plants that require a higher amount of watering could benefit from multiple Ollas. Also, Ollas can be interconnected to a general reservoir of water which refills each one as they deplete.

When Would I Need to Use An Ollas?

The main benefit of using Ollas is ensuring the round-the-clock supply of water to indoor plants. With an Olla in your plant pot or garden, you can avoid frequent watering, which could be time-consuming and could at times be forgotten. Using Ollas help prevent water runoff where water from rainfall or mechanically applied watering can no longer sufficiently quickly enter the spoil. Water runoff usually occurs when the soil has absorbed too much water at its highest capacity, and more water is introduced to the soil faster than the soil can absorb it.

The use of Ollas provides a steady release of water into the soil without exceeding its capacity. They help prevent extreme evaporation and allow deep watering directly to the roots of plants. Deep watering helps to ensure water and nutrients are more accessible to plants and for longer. You could add some fertilizer into the Olla to aid soil fertilization as well as watering. Another good reason to use an Olla would be based on how eco-friendly they are. Ollas for indoor watering is made out of clay easily agreeable with soil.Ollas do not leave any non-biodegradable substances in the soil.

These indoor plants are also relatively cheap and are an excellent addition to an established set of gardening utilities. Ollas are very useful during hot summers where rainfall could be very little or nonexistent. Using an olla for watering during such periods could help garden plants get sufficient water when needed. This would help prevent watering your garden under the scorching sun when the Olla can be refilled when its water content goes down noticeably.

What Type of Ollas Should I Use?

Ollas come in various sizes, can either be homemade or factory-made but usually come pot shaped. The size of Olla for indoor plants you would need to get or make depends on where you plan to use it. Whether to buy one from a store or make it at home would come down to personal preference and availability of the desired Olla in stores.

The kind of Olla you get should depend on the size of where you would use it and how long you would want the watering effect to last. A large garden would allow you to use a more oversized olla, but a small garden or even another pot would limit you to using a smaller sized olla. The size of Olla used would also dictate how long the watering effect would last and the frequency needed to refill the Olla with water.

No matter what size, you should make sure to grab a good lid to help avoid water loss through evaporation.

Ollas are a great addition to any gardener’s set of tools and are a good acquisition any day.

Can I use Ollas outdoors as well or only indoors?

Ollas are great options to add to outdoor gardens as well as indoors. When using outdoors, it can be a little trickier to monitor your plants to prevent overwatering, but especially in the heat of summer, an Ollas is a wonderful addition.

Why do Ollas need lids?

Lids or saucers prevent water loss through evaporation. You would be surprised how quickly water will evaporate if you’re not paying attention resulting in your plant not receiving the water it needs if the Ollas runs out before you intend for it to.

Do I have to make my own Ollas, or can I purchase them at the store?

Most garden centers or plant nurseries will have Ollas’ on hand for purchase if you rather not make your own at home.

What is the purpose of using Ollas for indoor plants?

If you are the forgetful type of person or your plants are prone to drying out and need more frequent watering’s, an Ollas can ensure your plant receives the water it needs to thrive.

What tools are needed to make an Ollas at home?

To make an Ollas at home, grab a saucer, terracotta pot, cement, mounting putty, and sand.