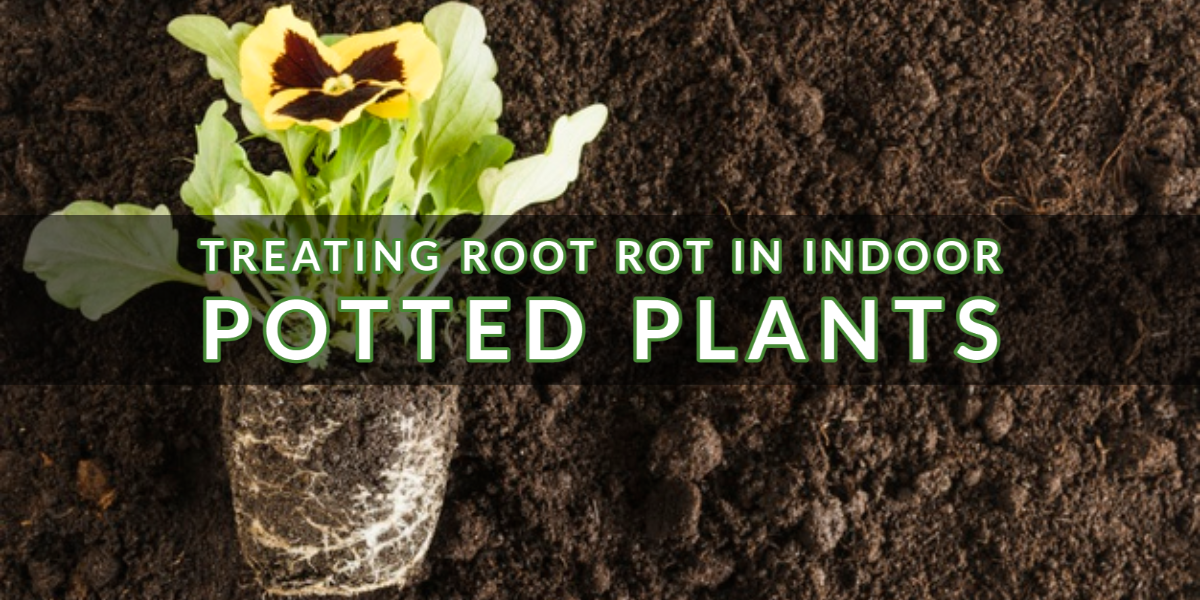 When left unaddressed, treating root rot can be difficult to do. Root rot, which is common in indoor plants, can leave plants severely damaged. However, there are ways to spot root rot early, treat it, and even prevent it from occurring.

What Is Root Rot?

Root rot is exactly what it sounds like: rotting roots. Root rot can spread quickly to the rest of the plant and prevent nutrients from being transported. If your plant’s leaves are turning yellow and slowly wilting for no apparent reason, it’s probably suffering from root rot. Affected roots will look like brown or black mush that easily fall off.

There are two possible sources of root rot: one is overwatering, causing roots to die due to lack of oxygen. Another is a fungus in the soil.

In cases of overwatering, your plant suffers a slow death as the roots drown. When the roots suffocate, they can start decaying or rotting away, spreading to other healthier roots. Pathogens can then attack the weakened roots and eventually kill the plant.

Alternatively, fungi can be triggered by overwatering, transmitted by bugs, or may already be living in contaminated soil. These fungi attack the roots and cause the plant to decay.

Common Causes To Watch Out For When Treating Root Rot

As mentioned, overwatering is the most common cause of root rot. Typical symptoms include moldy flowers, yellowing foliage, and loss of young leaves. These symptoms are common when the damage is already extensive.

Factors that contribute to overwatering include:

Disinfecting your garden tools eliminates the risk of your indoor plants contracting an infection from your equipment. Always sterilize your shears, trowels, and even your pots so healthy plants don’t get sick.

Much like people, sick or infected plants need to be isolated or quarantined to avoid infecting others. While you might not have a sick indoor plant, buying a new one can affect the ones you already have. If you notice plants with wilted leaves or puffy stems, keep them away from other plants until treated.

Stress is Also a Factor When Treating Root Rot

Getting stressed is another attribute plants share with humans. Aside from overwatering, too much or too little fertilizer can stress out your plant. Physical damage, improper lighting, drought, or other factors can also contribute to stress. Keep your plants happy and healthy, so they won’t be susceptible to root rot.

You might not know it, but pathogens are present in most soil. They only need the right conditions to flourish. Avoid recycling soil from your garden without sterilizing it first. You can opt for commercial mixes, which are often sterile but don’t combine them with compromised soil. To prevent contamination, store potting soil in an airtight container.

Spotting the signs and symptoms early is essential in treating root rot. Depending on the severity of your plant’s condition, signs will manifest in different ways. Unfortunately, the initial symptoms might not be as noticeable.

The first signs you should watch out for are yellow or wilting leaves. Typically, bottom leaves will wilt first, followed by the rest. This is because the disease spreads from the bottom up. When leaves curl during the day and recover overnight, you likely have a problem. Slow growth is also a symptom of struggling roots. Another indicator of early root rot is soil that constantly stays wet.

If the root rot progresses, your plant will start showing mushy or swollen stems. When you notice this happening, examine your plant by gently removing the topsoil. If the roots are still white and crisp, you have nothing to worry about. But if they start becoming limp or turning yellow, that means the disease may be at an intermediate stage. A particular odor will also arise from a plant suffering from root rot. Healthy roots often have an odorless or earthy scent. If you start noticing an unpleasant smell from your plant, consider taking steps to treat root rot.

If these symptoms have eluded you, your plant is bound to suffer from an advanced infection. This takes the form of mushy, black or brown roots. Late-stage infections can also cause stems to come off when touched.

What To Do When Treating Root Rot

How you’ll be treating root rot will depend on how mild or severe the disease is. If you’ve detected the initial symptoms of root rot, observe your plant and hold off on watering. Often, simply letting the soil dry can be the solution to mild infections.

If you find fallen material or mulch on the topsoil, remove it to improve evaporation and proper air circulation. Excess moisture encourages the development of pathogens. Therefore, it’s important to remove any contributors to this condition. If there’s a lack of proper airflow, take the plant out of the soil to dry it out. This will also give it extra oxygen.

However, if the root rot is already in its later stages, consider repotting your plant. You need to do this gently so as not to aggravate the roots.

Here are the steps you can take:

If the disease returns, this means you were unsuccessful in treating root rot. In this case, dispose of the plant and prevent it from coming in contact with other plants. Don’t forget to sterilize the pot again, as well as other garden equipment used. Discard the soil.

Take preventative measures to avoid repeated instances of treating root rot. Here are simple but crucial steps you can take:

Can I get root rot from store-bought plants?

This is possible if a store sells you a plant that’s already suffering from root rot. Always quarantine new plants for a few weeks to watch for signs of a problem.

Can fungi cause root rot?

The presence of fungi can definitely cause root rot. The two most common are fusarium and pythium fungi. Fusarium fungi typically attack roots and stems with cuts or lesions. They take over dead or dying tissues and the condition worsens with overwatering. Pythium fungi, on the other hand, are parasites transmitted by fungus gnats. This type of fungus consumes decaying plant matter.

Can root rot be cured?

Treating root rot depends on how far the disease has progressed in your plant. If you manage to stop the initial signs and symptoms of root rot, there’s a chance you can save your plant.

However, if the issue remains unaddressed for too long, the disease can spread out to the entire plant. In its intermediate stages, treating root rot may necessitate repotting the plant. Do this gently so the plant won’t experience unnecessary stress.

It’s too late to treat root rot when the roots have become black or brown mush that fall off. Similarly, puffy stems falling off in your hand are also a sign of severe root rot. You can still try repotting, but if the rot returns, throw away the plant to prevent further contamination.

What is the main cause of root rot?

The most common cause of root rot is overwatering. This happens because of several factors:

Other contributors include contaminated garden tools and soil, sick plants coming into contact with healthy plants, and plant stress.

Root for Your Roots

Root rot is a serious issue that you can prevent if you give your plant constant care and attention. Avoid treating root rot altogether by taking appropriate measures to prevent overwatering, which is the main cause of this disease.

Whether you’re brand new to indoor gardening or have been growing your plants indoors for years, our site exists to provide you with all the steps required to make your garden flourish. From grow lights, to soil tips, to indoor gardening kits, there’s always more information you can use to help your garden grow.
All Posts »
PrevPreviousHow To Treat Spider Mites on Indoor Plants
NextPurple Passion Plants – Your Guide for Indoor Purple Passion PlantsNext