Lilies of the Valley: 10 Legends and Facts About this Beautiful Plant 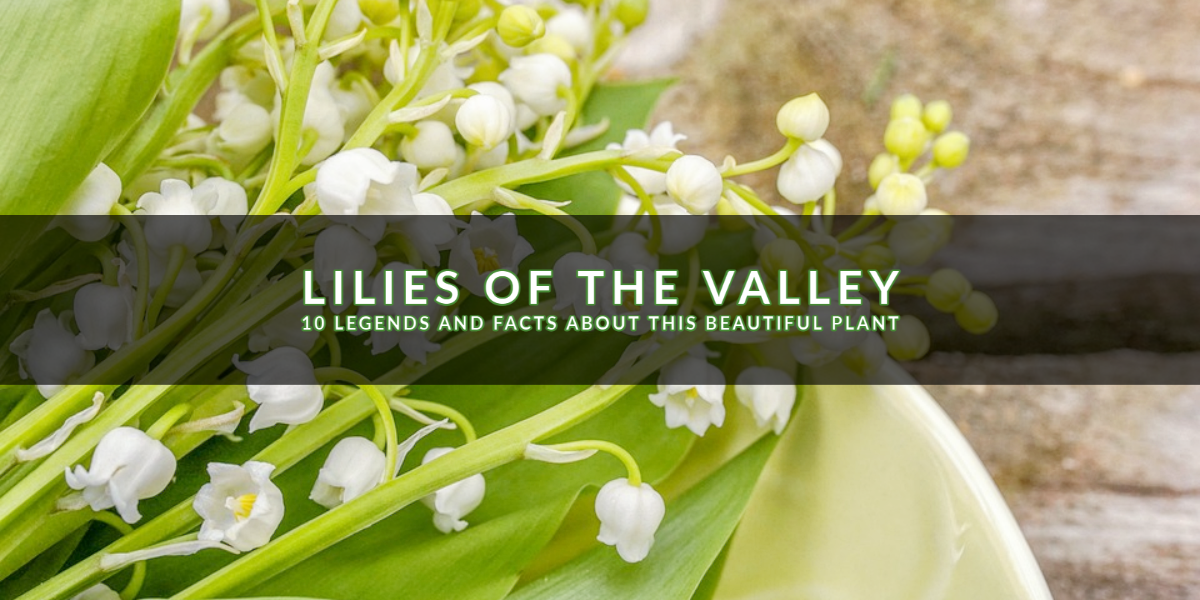 Convallaria majalis, more commonly known as Lilies of the Valley, are aromatic perennial herbs from the asparagus family. They are native to the colder climates found in Europe and parts of Asia. Many legends stemming from various sources and different origins have links to the Lily of the Valley. Here, we discuss ten legends and facts about this beautiful plant.

1. Lilies of the Valley Have Biblical Origins

Legends say the Lily of the Valley was created out of Eve’s tears when exiled from the Garden of Eden. People also call it Mary’s Tears or Our Lady’s Tears from the story of Mary weeping as Jesus hung on the cross.

2. They are Linked To a Saint

According to legend, Saint Leonard lived near Horsham in Sussex, 40 miles away from London. St. Leonard came to England early in the 6th century to live a life of prayer in retirement. He had the intention of living as a forest hermit in a forest now named after him. However, a dragon, sometimes called temptation in some versions of the story, disturbed St. Leonard. They fought a hard and long battle, where a lot of blood was spilled. Legend says that nettle sprouted where the dragon’s blood fell. However, the lily of the valley grew where St. Leonard’s blood landed. As the legend goes, St. Leonard eventually slew what was perhaps the last dragon of England.

4. They Grow All Over the World

The Lilies of the Valley come in three varieties, which grow around Japan, China, and America. They grow during the spring season, where it produces white to soft pink buds. Unfortunately, this delicate-looking flower is poisonous.

5. There Is a Tradition Behind Lilies of the Valley

Commonly known as Muguet in France, the Lily of the Valley is a gift in their yearly tradition for centuries. Legend has it that this custom began in the 16th century on May 1, 1561. King Charles IX received these flowers as a gift and loved the idea so much that he started a tradition. From that day forward, he would present the lilies of the valley to the ladies in his court. And thus, the Lily of the Valley Day, also known as Fête du Muguet, was born.

6. The Legend of the Lily And The Nightingale

7. Lilies of the Valley Aren’t Tolerant of the Heat

The lily of the valley can live on for decades, provided that it is in a cool environment. It can withstand temperatures as low as -11°C. If you’re growing one in a hotter climate or during hot summers, it’s essential to give this plant shade. Shade is vital during afternoons when temperatures are at their peak.

8. Their Tradition Is Still Practiced Today

Because of the earlier mentioned tradition, it became customary for men to give bouquets as a token of affection. In the early 20th century, men presented their gifts every year on May 1. In the absence of the flowers, they sent postcards with beautiful drawings of them. The wish of good luck would often accompany these gifts, and sending Fête du Muguet cards lives on even today.

9. The Bible Mentions Lilies of the Valley

Some believe that lilies of the valley are a sign of Christ’s second coming. “Easter Lily” and “Lily of the Valley” are often confused with each other, as they both represent purity in Christianity. However, Lilies of the Valley are mentioned in the Bible 15 times, with eight coming from the Old Testament in the Song of Solomon.

10. They Belong in the Asparagus Family

Despite the name given to them, Lilies of the valley (Convallaria majalis) aren’t actually lilies. They are classified inside the Asparagaceae family, although their leaves are similar to some lilies. They also go by other names such as Our Lady’s Tears, May Lily, Ladder-to-Heaven, and May Bells. Even its scientific name refers to this lily’s common name; Convallaria means “valley plant.” This reference is because Convallis means ravine or valley in Latin. While it was classified under a different species once, we now classify it under the asparagus family.

Lilies of the Valley – The Wrap-up

Many see this as a small, delicate flower, but many legends and traditions are associated with it. The lily of the valley is a highly symbolic flower and is the classic representation of spring. It signals the new season’s arrival in May, thus, becoming a favorite plant for many people worldwide. Its sweet smell also captivates anyone who smells it and is a popular choice for various occasions. We almost forget that this flower has a rich and fascinating story of origin with so much to offer. Some stories are true, while, of course, others are legendary.

Whether you’re brand new to indoor gardening or have been growing your plants indoors for years, our site exists to provide you with all the steps required to make your garden flourish. From grow lights, to soil tips, to indoor gardening kits, there’s always more information you can use to help your garden grow.
All Posts »
PrevPreviousHydroponic Herb Garden Setup and Care Guide
NextBromeliad Care Guide: How to Grow this Beautiful Plant IndoorsNext