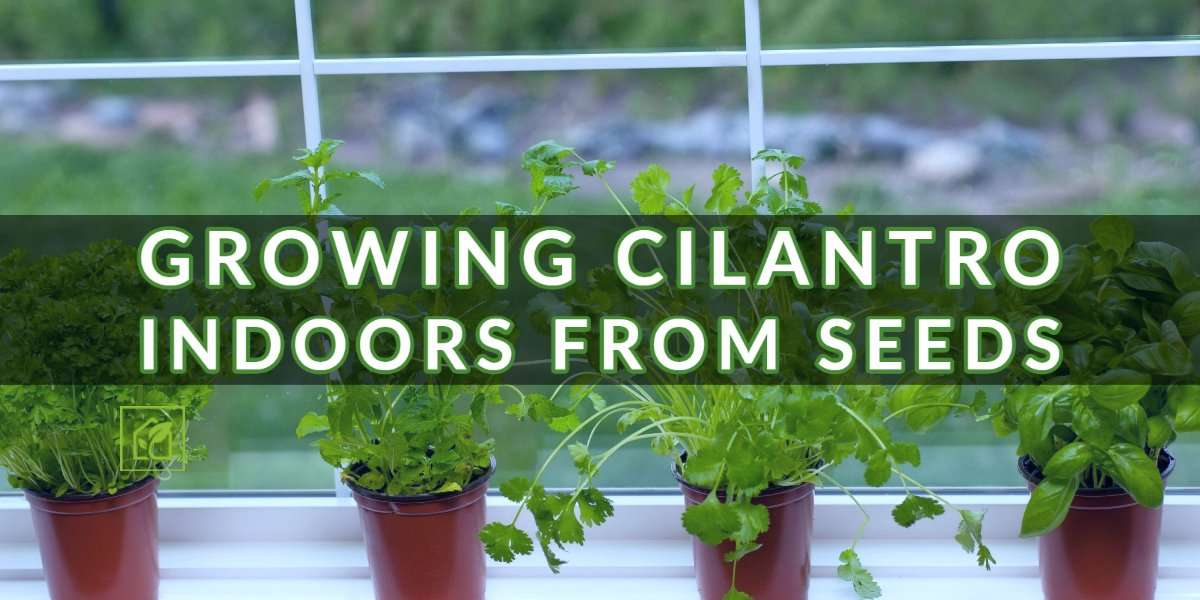 Do you love cilantro and want to be able to harvest the flavor year-round? Then you must consider growing cilantro indoors. Aside from cooking, cilantro is known to have healing properties, aiding in relieving arthritis and muscle pain. This article will provide you with everything you need to know about planting and growing cilantro in the comfort of your home and the basics of how to get started today.

Before getting into the grit of the article, did you know that cilantro is presumed to be derived from southwestern Europe and the Mediterranean? Not from Mexico or of Spanish origin, like most people assume. Meaning cilantro dates back all the way to the era of the Egyptians, where it is believed that seeds were placed onto tombs of the deceased.

Cilantro (Coriandrum sativum) is an annual herb that closely resembles and is in the same plant family (Apiaceae) as parsley. Cilantro has a similar growth habit to parsley; however, cilantro does not respond well to multiple harvests. The distinctive flavor of cilantro leaves is quite different from that of parsley. The leaves of cilantro are light green, feathery, and flat. Cilantro leaves can be used as an herb, and the dried seeds, called coriander seeds, are used as spices providing a very different taste.

Type of Container to Use for Growing Cilantro Indoors

The best container size for a single cilantro plant is around 8 inches in diameter and 6 inches in depth. The container’s width is necessary for leaf growth, and the depth is vital for the long taproot of cilantro. However, some people grow cilantro and other herbs in egg cartons or yogurt containers. This is fine, but if you plan to keep cilantro for the long haul, it is ideal to start in the ideal container to minimize any need for repotting.

Cilantro does best in airy, light, fast-draining soil with plenty of perlite or sharp sand mixed in to help with drainage. Regular gardening soil will be too thick and heavy for cilantro to thrive, making it crucial to get the proper soil from initial planting. You can buy a premixed potting mix for herbs from your local garden center; just be sure that it consists of lightweight, fast-draining properties.

The correct amount of water is the key to growing cilantro indoors. In addition to ensuring the soil drains well, cilantro plants enjoy a thorough watering rather than frequent ones. In the beginning stages of cilantro growth, a spray bottle is an ideal and gentler way to water the seeds without disturbing them.

Cilantro requires at least six hours of sunlight per day. If you plan to grow cilantro indoors during the winter months or in Northern climates, you may need to add artificial growth lights. If you do use grow lights, your plant will need exposure for at least 14 hours daily. Grow lights need to be placed a couple of inches above the plant to avoid burning the plant leaves and stems. If plenty of natural sunlight is available, you must rotate your plant regularly to allow the herb to mature evenly and prevent it from becoming leggy.

The ideal temperature for cilantro is between 55 and 75 degrees Fahrenheit. If the environment around the plant gets too hot, it can cause the plant to bolt or seed, which will strip nutrition from the plant. If indoor temperatures are kept below 75 degrees yet above 55 degrees, which most homes are, the cilantro plant will be relatively comfortable.

Store-bought fertilizer or fish emulsion are both reliable options to fertilize your cilantro. Use at half the recommended concentration for the container’s size as too much fertilizer can be just as detrimental as too little.

When your plant has reached about 6 inches in height, you can begin harvesting your cilantro. For the best flavor, harvest the youngest leaves. The older leaves tend to be bitter compared to the younger leaves. With clean hands and clean, sterilized scissors, it is best to harvest approximately 1/3 of the plant per week. After the harvest, cilantro will not regenerate. For a steady supply of cilantro, it is best to plant seeds every two to three weeks.

How To Know If Your Cilantro Plant Is Wilting

The symptom to look out for to know if your plant is healthy or not is the yellowing of the leaves and drooping of the plant. Cilantro can sometimes wilt despite frequent watering.

How to Revive a Wilting Cilantro Plant

If your cilantro is wilting, these are the steps to reviving wilting cilantro:

If the cilantro stems are falling over the weight of themselves, many different scenarios can be to blame for it:

How to Fix Drooping Cilantro Plants

The key to reviving fallen over cilantro is to recreate the optimal growing conditions and prune them regularly.

A few key factors to fix drooping cilantro plants are:

Growing cilantro indoors should not be a difficult task to accomplish. Cilantro is a low-maintenance plant, one every person should consider keeping in their kitchen.

Is cilantro easy to grow indoors?

Cilantro is an easy herb to grow inside your home, and it doesn’t need much to create adequate growing space. As with most indoor plants, your cilantro plant can thrive indoors with the right amount of care.

Why does my cilantro plant keep dying?

The reason for a dying cilantro plant is commonly due to too much sun or not watering frequently enough. To prevent this, be sure to rotate your plant frequently and water to keep the solid moist but not over-saturated or puddled.

Does cilantro grow back after harvesting?

No, unlike some other species of herbs, cilantro does not grow back once you harvest material from the plant; it is not considered a “cut-and-come-again” herb. Once you begin harvesting, you can expect to harvest leaves for about 8 to 10 weeks before the plant reaches the end of its life.

Can you grow cilantro indoors year-round?

Yes, you can grow cilantro year-round, making it, so you have a supply of fresh herbs whenever you need it. However, to do so, you will need to plant new seeds regularly, as cilantro is a short-lived annual plant. In the winter, when days are shorter, it may be necessary to supplement natural lighting with an LED grow lamp.

Does cilantro grow well in pots?

Yes, cilantro does grow well in all types of pots indoors. One of the most critical steps is choosing pots with drainage holes to allow excess water to drain. Use coconut coir or potting soil to fill containers and keep it moist without being saturated.

Whether you’re brand new to indoor gardening or have been growing your plants indoors for years, our site exists to provide you with all the steps required to make your garden flourish. From grow lights, to soil tips, to indoor gardening kits, there’s always more information you can use to help your garden grow.
All Posts »
PrevPreviousHow To Create an Indoor Moss Pole
NextAfrican Violet – Your Complete Indoor Care GuideNext