Calathea Medallion – Everything You Need to Know About This Beautiful Plant 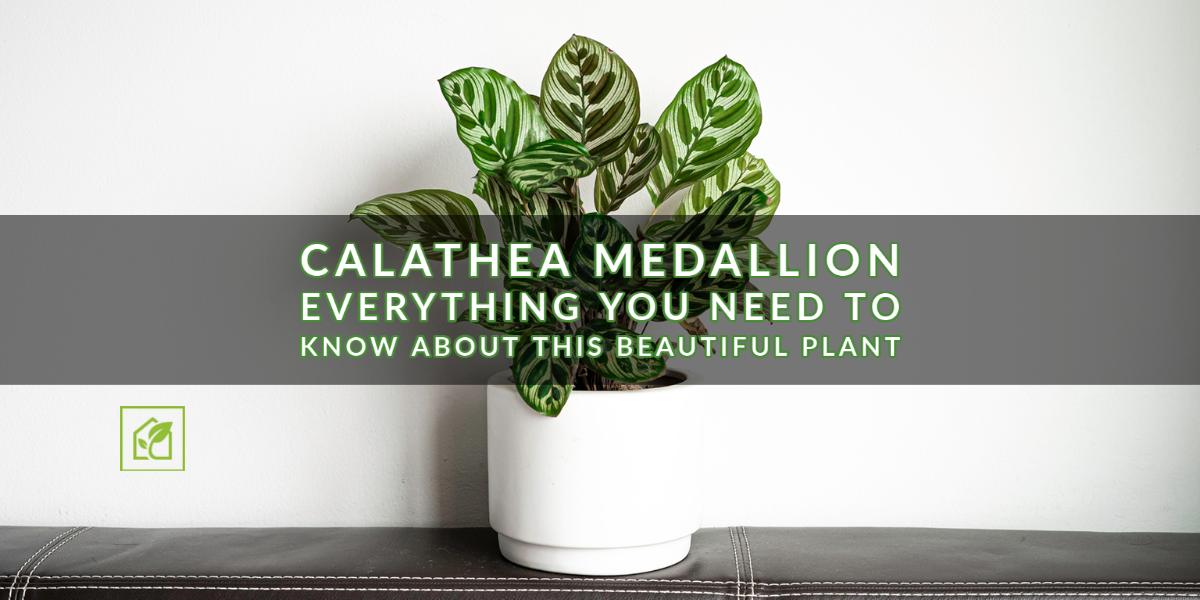 A Calathea Medallion is a very popular house plant, and with good reason. They are low-maintenance plants that thrive on neglect. In this article we will talk about how to care for your calathea medallion from the time you purchase it until it has grown into its full beauty and size!

Many calatheas sold in the trade today have been hybridized in California by growers who have been intent on creating new cultivars with a variety of leaf colors and striping patterns as well as some impressive flowers. These hybrids tend to be more compact than the parent species from Brazil, reaching only 8 to 18 inches tall at maturity. The popularity of these hybrids has led to an explosion of new cultivar names for calathea medallions.

If you are looking for an easy houseplant to take care of, then this might just be it! Calathea medallion plants are very forgiving and can thrive in low light. Also, they don’t require large amounts of water or specialized light conditions.

To start with, when you buy your calathea medallion make sure to look for a plant that has a firm stem at its base. This is important because it will become the primary part of the plant which has roots and can be propagated from cuttings. You may also want to purchase more than one to ensure success while propagating.

If you’ve carefully chosen all you need now is patience as your Calathea Medallion grows and matures into a full-grown beautiful specimen! It should take anywhere between six months or two years before they are fully mature depending on care provided and the plant’s environment.

The calathea medallion likes a lot of water, but not too much! When you first get your plant start off by watering it every day until the soil is moist. Once you have established that daily routine, reduce watering to one or two times per week and then once every two to three weeks if desired. If your calathea medallion becomes wilted (the leaves droop), then it needs more water!

Calathea Medallions need partial shade, so make sure they’re getting about six hours of filtered sunlight each day at most. If they are in direct light their leaves will burn and die faster than normal which can stunt growth rates as well as shorten the lifespan of your new plant.

Keeping an eye on fertilizer levels is important to the life of your calathea medallion plant. It’s recommended to fertilize once a week with organic fertilizer. But when they are in direct sunlight, you may need to do it more often due to higher levels of nutrient depletion and increased water loss.

The calathea medallion prefers temperatures between 65°F-75°F during the day and 55°F-65°F at night. During colder months, you can help keep their temperature up by using a heating mat or other heat source designed for plants such as grow lights, if needed. This plant is tropical and cannot tolerate cold temperatures below 60 degrees Fahrenheit. Humidity is important for the calathea medallion plant. If it has low humidity, then they will become dry and shriveled. To combat this problem, you can use a humidifier or mist them daily with water.

Humidity is important for the calathea medallion plant. If it has low humidity, then they will become dry and shriveled. To combat this problem, you can use a humidifier or mist them daily with water.

Unfortunately, pests like aphids can find their way to your calathea medallion, and they can be difficult to get rid of once they’ve settled in. The best way to keep your plant healthy is by checking for these pests regularly and treating them before the infestation gets out of control. Aphids are a very common pest that affects calathea medallions, so it is important to watch closely for them as well as their eggs.

Spider mites can also be problematic if not dealt with quickly. It’s important to monitor your plants closely and look out for symptoms like dry leaves which are commonly caused by these pesky insects! Also make sure to wash all pots before re-using to avoid recontamination.

Some diseases that affect calathea medallions include leaf spots, which will cause yellow or brown patches on leaves. Some other problems you may come across are root rot, stem dieback disease, bacterial soft rots, powdery mildew mold, and leaf curl virus. All these issues are most likely to happen if your calathea medallion that is getting too much water. So, be aware of your plant’s soil condition. Don’t let it get soggy, just moist.

The Best Potting Soil for Your Calathea Medallion Plants

Many types of potting soil can be used for calathea medallions. Some recommendations are to use a mixture of organic compost and sphagnum peat moss, or avocado bark and perlite. If you decide on buying your own mix instead, make sure it is well-draining so that excess water doesn’t collect and cause root rot or other problems.

The calathea medallion can be propagated from cuttings and it really doesn’t need anything special for this process to work! When choosing your cutting, pick one with healthy leaves or new shoots on the top of the plant. Cut off about an inch long piece of stem before making sure there are at least two nodes (the place where roots grow out). Dip your fingers into rooting hormone powder and coat the ends of each node thoroughly then stick them into soil mixed with sand, perlite, peat moss, vermiculite, or sphagnum moss. Any type will do as long as they are well-draining. Keep the soil moist with frequent watering and watch for roots to grow.

What are some common types of calathea plants?

Cultivars of calathea medallion include:

C. Zebrina is one of the most popular types of medallions for home and garden use. It has broad leaves striped in reds, oranges, yellows, and purples. In fact, people sometimes refer to it as a “zebra plant” or “painted calathea”. This is a relatively new cultivar that first appeared in the mid-1980s. It’s easily identified by its unusual leaf markings, which have been compared to every kind of zebra and even puzzle pieces.

C. crocata was introduced around 1990, although the origin of this plant isn’t known for certain; some suspect it’s a hybrid between C. Zebrina and C. moorei. The leaves of the crocata cultivar are usually striped, but do not form a neat pattern like the zebra. The main difference between C. Zebrina and this variety is that it has larger calatheas on a more compact plant, with shorter stems; its leaves also have a waxy sheen to them. It’s considered an “improved” variety because it is more cold-tolerant than other species and has a faster growth rate.

This is a rarer type of calathea, with leaf patterning that resembles feathers; because of this, it’s sometimes called “feather-leafed calathea” or “soft-feather plant.” The leaves are silvery white beneath and dark green on top. This cultivar was introduced in the mid-1990s. It’s one of the few calatheas that look good growing in low light and is considered a slow grower.

C. roseopicta is another slow-growing variety calathea and one that can be difficult to find at nurseries. It was bred in the Netherlands by crossing C. Zebrina with C. moorei. It has red, pink, or white flowers, depending on climate conditions, and it has mottled brown and greens leaves, with red or gold spotting. The underside of the leaves is a bright green, which makes it easy to identify when compared to the other calathea species.

C. makoyana is a hardy, upright species that was first seen in Europe around 1900. Gardeners use this calathea cultivars more than almost any other. It has many more leaves than other types, with irregular green and white stripes (in some lines) that form a chevron pattern at the center of each leaf. It’s easy to propagate from softwood cuttings and has a reputation for being more tolerant of cold weather than other cultivars.

This cultivar was discovered in the field and is distinguished from C. ornata by its larger leaves with irregular green and white stripes (instead of a chevron) patterning on a dark green background. Gardeners know it for faster growth than other ornata varieties.

How do I water my calathea medallions?

Water calathea medallions when the soil surface dries and/or the weight of the pot feels light. When you spot signs of wilting on your plant, give it a good watering. Calatheas like to become very dry before soaking, so be patient.

What are ideal humidity levels for calathea medallions?

Calathea medallions require high humidity. Ideal conditions for the plants would be about 70 percent relative humidity. If you keep your home quite dry, consider using a humidifier near your calatheas to increase their moisture levels; place it no closer than six inches from the plant’s exposed leaves.

What are ideal temperatures for calathea medallions?

Calathea medallions require a steady temperature of 65°F to 75°F during the day and 55° to 60° at night. Remember that some plants, including calatheas, prefer cooler temperatures than others; you can adjust your heating schedule accordingly.

What are lighting requirements for calathea medallions?

Calathea medallions prefer bright indirect light. In a typical home, this means situating the plants six to eight feet from west-facing windows during spring and summer. During fall and winter, you can reduce the amount of light without causing major harm to your calathea.

Calathea medallions are upright foliage plants that readily fill out into broad, rounded rosettes. At maturity, the species typically reach between 24″ to 36″ tall if supported by a cane or cactus stake. Otherwise, calathea medallions will become bare-bottomed bushes without adequate support. This occurs as the creeping stems grow until they touch the soil and root there to form new plants. And, this is a wonderful way to propagate them! Calatheas have succulent rhizomes that form the thick “cushion” of leaves around their bases from which multiple shoots rise. The upper surface of each leaf is frequently dark green with white or cream stripes. The leaves are often described as “marbled” or “agouti.”

Whether you’re brand new to indoor gardening or have been growing your plants indoors for years, our site exists to provide you with all the steps required to make your garden flourish. From grow lights, to soil tips, to indoor gardening kits, there’s always more information you can use to help your garden grow.
All Posts »
PrevPreviousPalm Plants for Low Light Areas
NextIndoor Vertical Garden Basics – 5 Tips to Get StartedNext